This Is What Your Urban Garden Can Grow in One Year

Think you have too little space in your city backyard to garden?  I’m here to tell you that as long as you have decent light, you don’t.

This year I planted a small garden in my backyard in a designated garden area, amongst my flowers wherever there was space, in pots, and in three raised beds.  That sounds like a lot of space, but it really isn’t.

Here are my results. 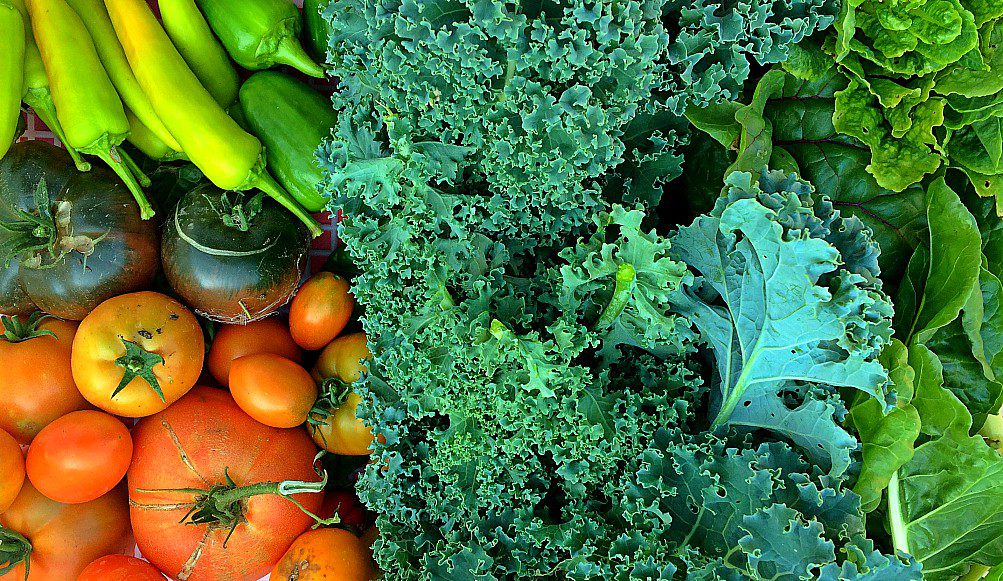 Now before you start thinking I’m a complete gardening genius, I’m not.  I’m a wife and a mother of a young child, am self-employed, and don’t have all the time in the world to garden.

I hated gardening as a child, but now that I’m an adult I want to see how much food I can provide for my family with the limited space we have.  Gardening is pretty enjoyable once it’s your own. 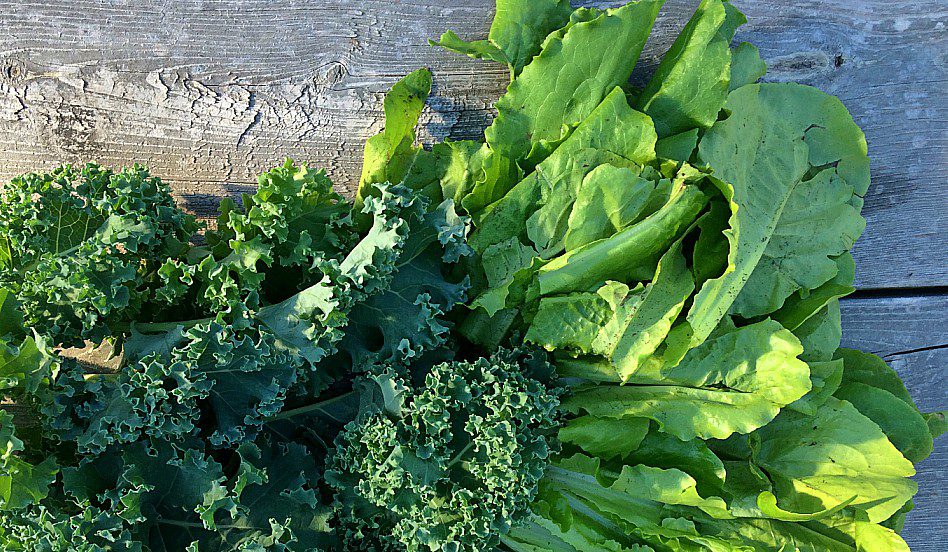 This year I planted butter crunch lettuce, kale from seed and starters, and every variety of Swiss chard I could get my hands on.  The lettuce and kale did very well, but the Swiss chard would not grow.  It would get going a little ways and then immediately die.

Little did I know that the birds around my yard LOVE Swiss chard and had been eating every little seedling that sprouted.  I reseeded and the birds left that crop alone, probably because other plants had taken over their attention.

Lesson for next year: Either provide a bird feeder to distract them OR come up with some sort of scarecrow.

Related: Gardening when you have no clue

Yet again my pea crop was terrible.  I was lucky to get maybe 20 pea pods.

The beans made up for it.  I planted just the right amount to have fresh beans for meals and give a bit to friends for 3 weeks.  Next year I’d like to plant succession crops so I have some all summer long. 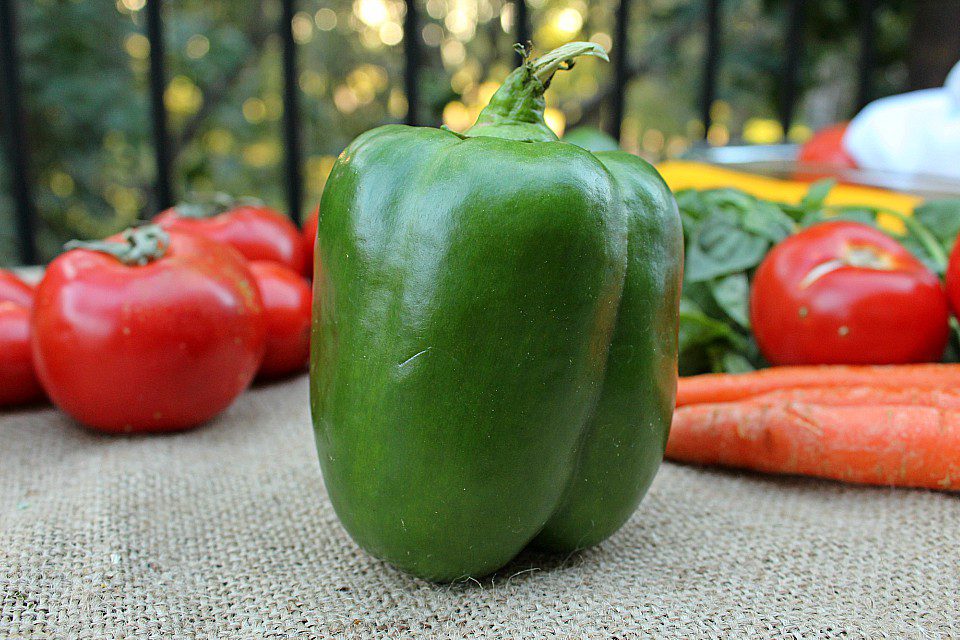 Peppers: The Great Triumph of 2017

I have never been able to grow a decent pepper.  My plants usually end up stunted and I get the teeniest tiniest peppers from them.  This year I found the right spot to grow them.

I grew two bell peppers that were the size of one you’d find in the grocery store, and some Hungarian wax peppers that produced very well.

The only bad part?  I can’t grow them in the spot next year because I need to rotate my crops to keep the soil healthy.

This year my zucchini didn’t germinate.  It was a challenging year for gardening, so I’m not surprised.  However, one summer squash and one weird volunteer-zucchini-like-plant provided me with vegetables up until the first very hard frost.

I’m a sucker for volunteer plants, so I had to let it grow.  It resembled a zucchini, but it was a very pale yellow, almost white. 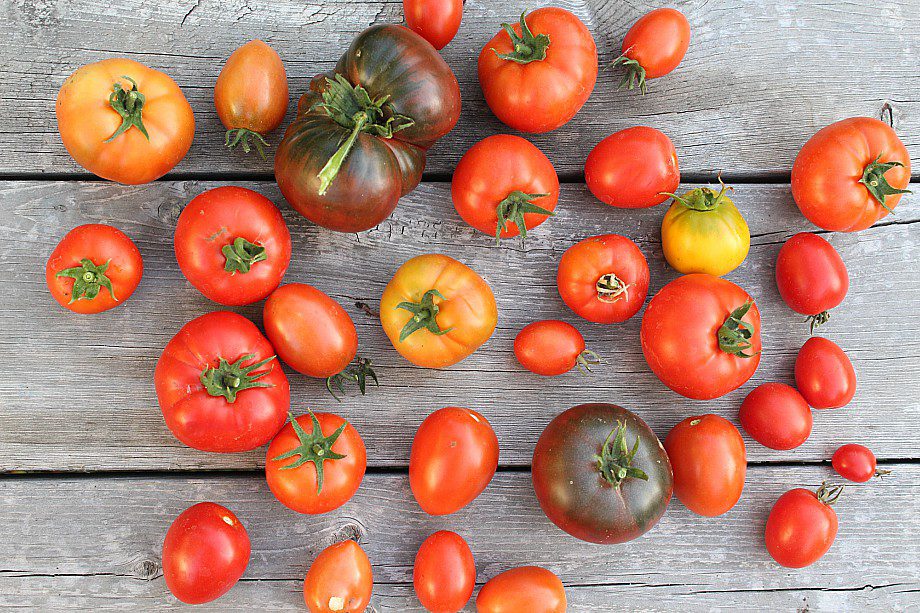 The year was very challenging for tomatoes.  I started 75 seeds and only four ended up being viable for my garden.  This was not all the seeds fault.  I think putting the grow light in the basement isn’t a good idea.  Maybe there’s not enough extra light, or it’s too cold, but it didn’t work out well.

The stuff that did grow was prone to blossom end rot.  We were out of our house for 2 months, so it was hard to be consistent with watering.  After 2 weeks of watering every. single. day. the blossom end rot went away.

Here’s how to fix blossom end rot in your garden.

I planted Lemon Boy, Black Krim, Roma, Fantastic, and Early Girl tomatoes.  Next year I’m going to research which varieties have lower acidity and stick to those.  There’s something about a higher acidity tomato that makes my tastebuds unhappy.

Make some delicious roasted tomato sauce with your crop.  Get the recipe here!

Onions, Cucumbers, and Other Disappointments

My onions ended up growing no larger than golf balls for the second year in a row.  I’m not sure what I’m doing wrong.  They grew just fine three gardens ago.

Four cucumber plants produced a total of 15 cucumbers. . . total.  I think I need to give them their own garden box next year.

I got too greedy with wanting my broccoli to get bigger and all of it except one plant bolted.  My cauliflower never produced anything put leaves.

The butternut squash had too much shade and didn’t do anything. 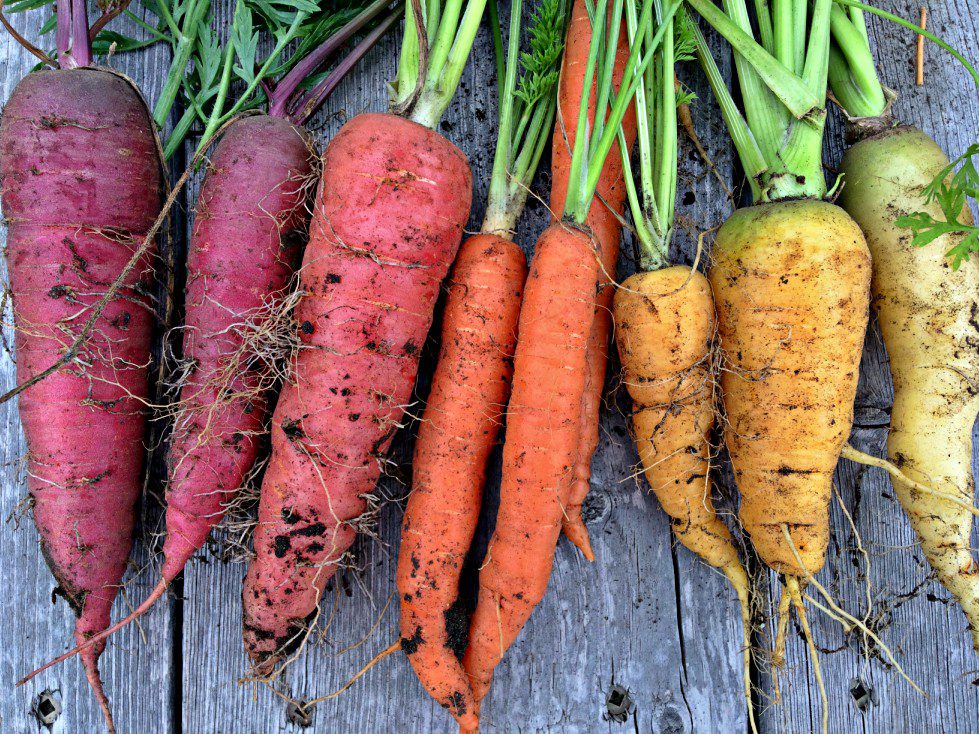 These are the smallest and saddest carrots I have ever grown.  However, they are certainly the prettiest.  I will plant all of the coloured varieties again next year and hope for better luck.  (For reference, each carrot is no more than four inches long.  Usually they grow to at least twice that.)

My only consolation is that pretty much the whole province of Saskatchewan had a terrible carrot year this year.

I started quite a few varieties of pumpkin from seed, but only had three plants that survived the outdoors.  Those that survived gave me 9 decent sized pumpkins and two adorable baby bump pumpkins.

Related: How to Harvest and Process Fresh Pumpkin and 25 Recipes to Feed Your Pumpkin Addiction

I also made this cute little arrangement from one of my smaller pumpkins and succulents that needed to be repotted.  Learn how to make it here. 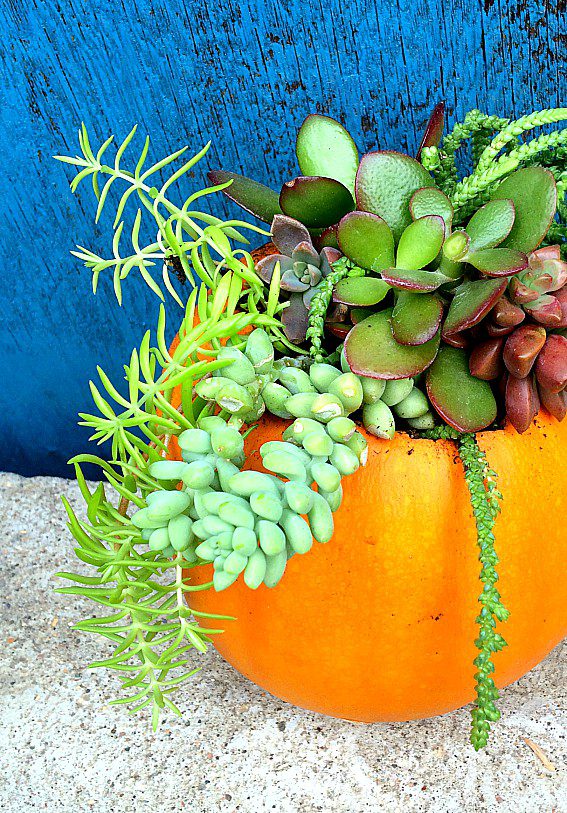 My potato crop was decent enough, but not what I was hoping for.  Each plant gave us 5-7 medium sized potatoes.  Nothing like the harvests of my childhood with 10-12 potatoes per plant, with some giant potatoes in the mix.

My experimental fall garden is doing very well so far.  It’s gone down as far as -7 degrees celsius and the greens are still doing great.  I should probably water them more!  It’s hard to remember because watering isn’t a garden chore that I normally associate with fall.

Not sure what to do in your garden?  Here’s 7 Autumn chores for easier gardening in the spring.

This is How much Food my Urban Garden Produced

This year I decided to take a picture every time I harvested something.  While it’s not enough to feed a family all winter long, it did provide some nice fresh vegetables during the summer and fall.

I hope this inspires you to make the most of your tiny city backyard. 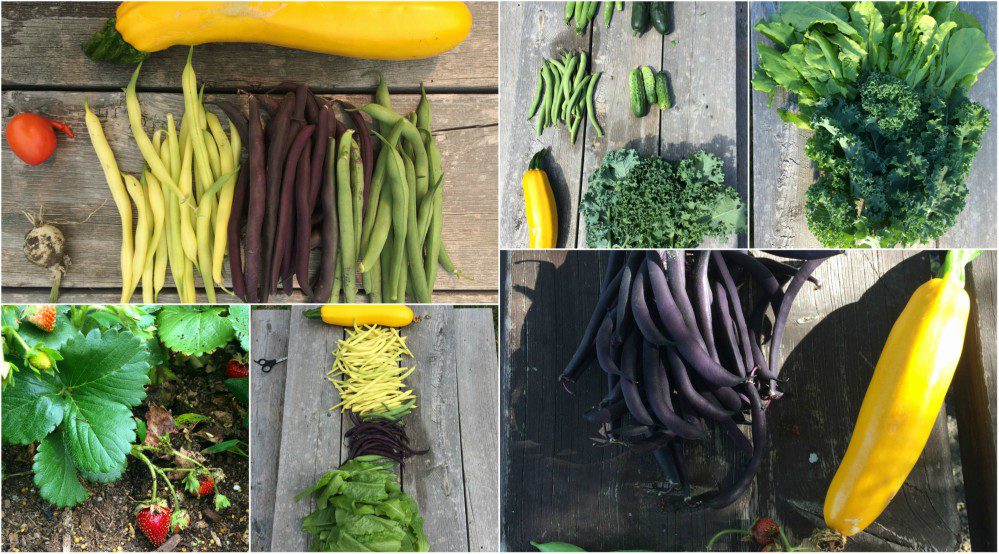 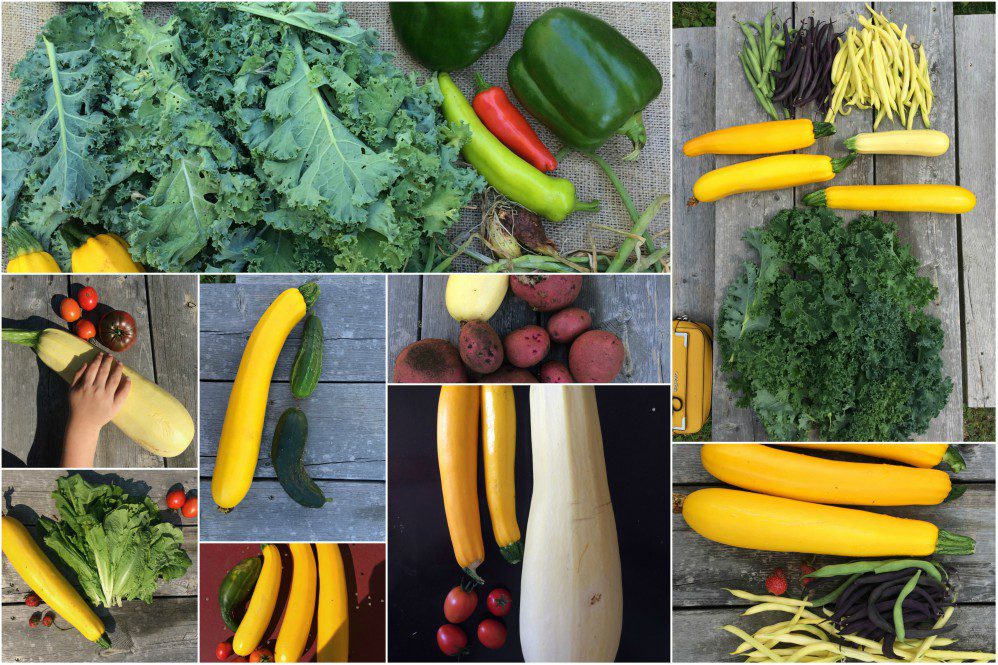 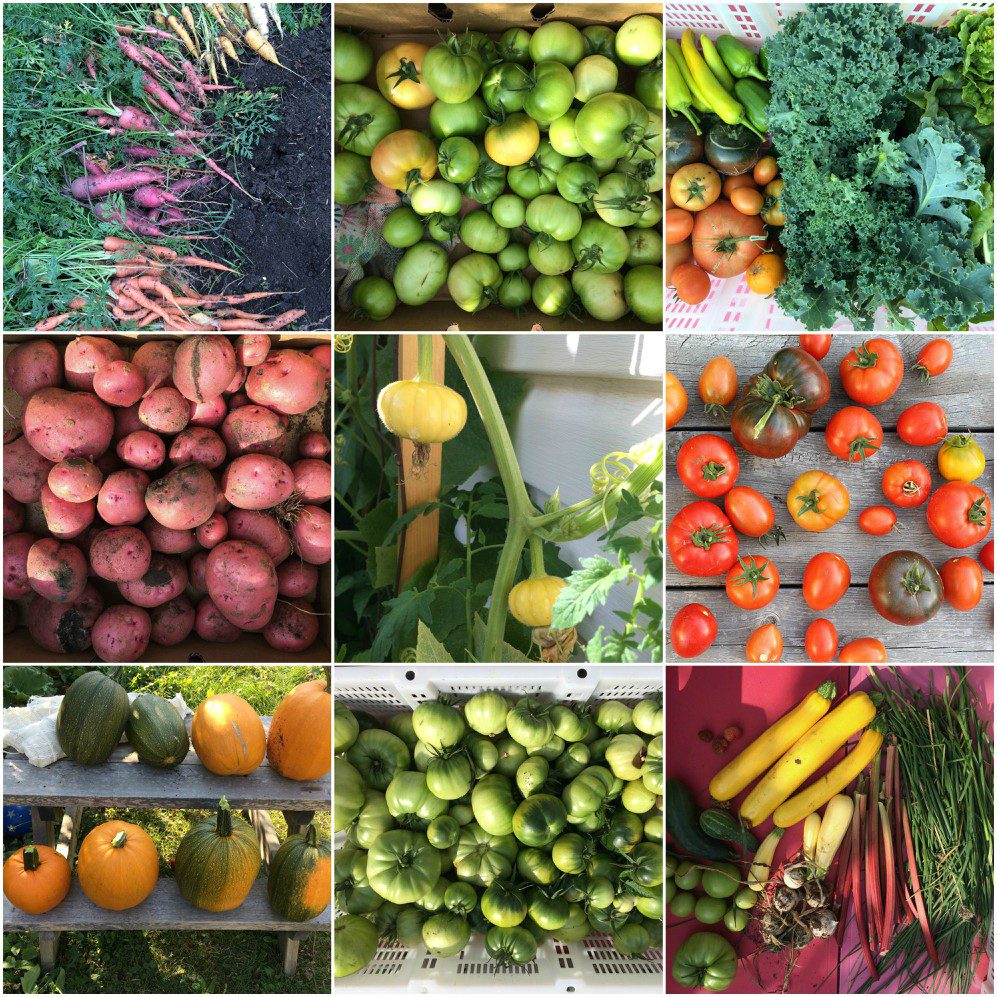 How did your garden do this year?  Tell me one thing that worked and on that didn’t.  If you have no garden, ask me a question!

Pin me for later.