Published by Kristen Raney on January 27, 2017
Jump to Recipe
Pin 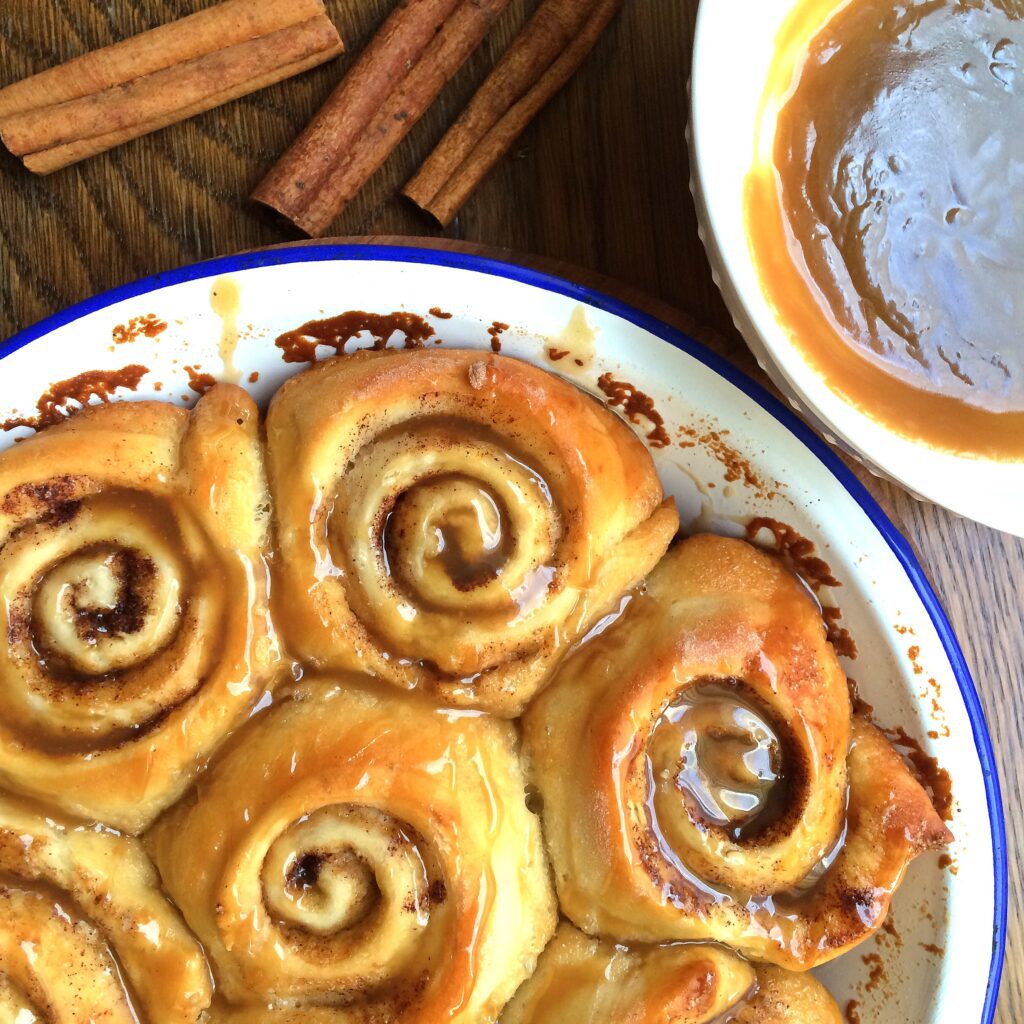 A lot of my friends have been having babies in the past month or two, and these cinnamon buns are the perfect thing to bring.  I realize that I have just recently posted a cinnamon bun recipe, but one of my readers requested these.  #sorrynotsorry.

These are just like the cinnamon buns your grandma used to make, but with a gooey sauce on the bottom.  The recipe fits in your mixer and makes around 32 cinnamon buns.  You can use any favourite bread recipe to make them.  I’ll be sharing mine at the end of the post. 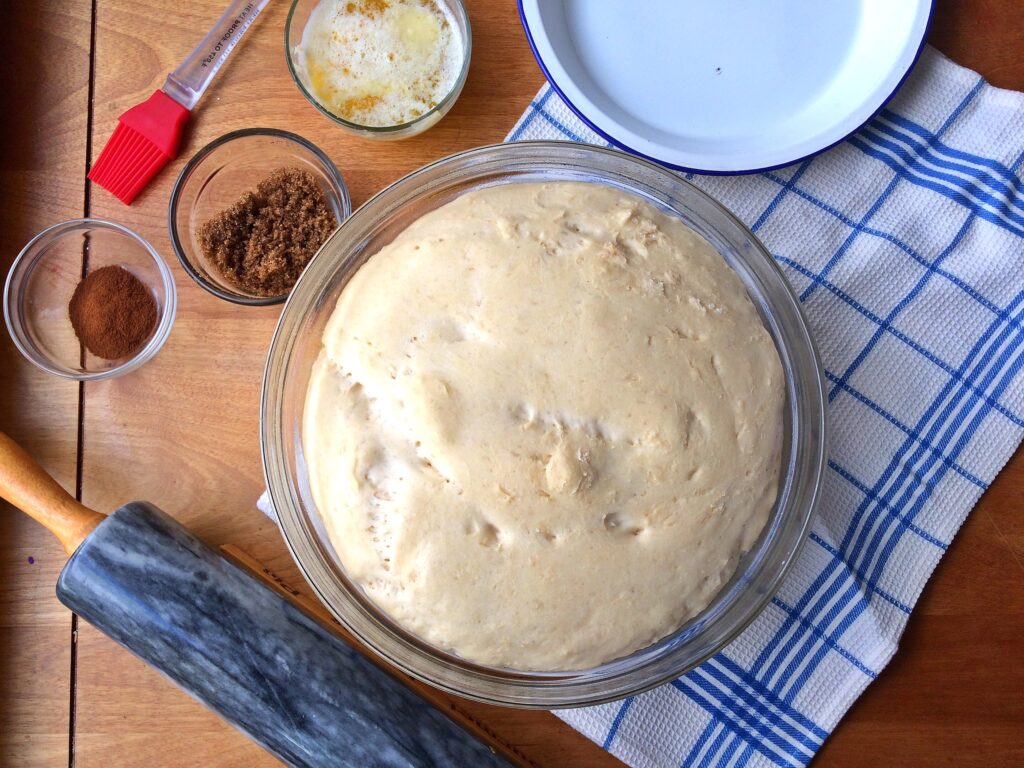 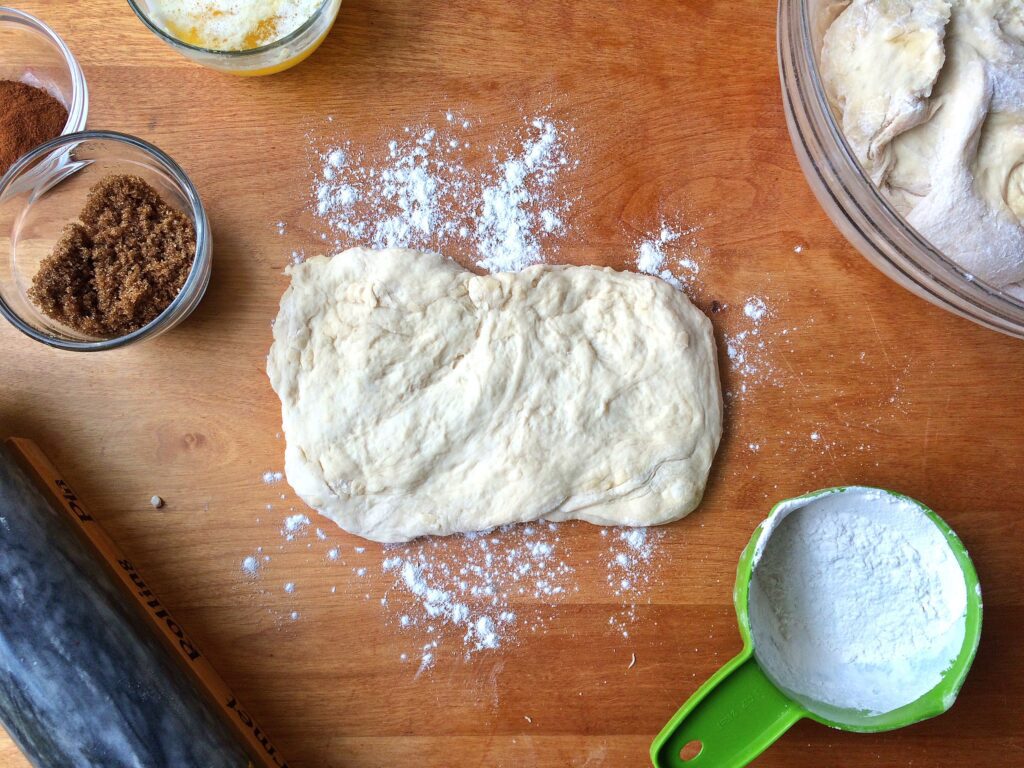 Use a thread or piece of floss to cut the cinnamon buns.  Using a knife often squishes the rolls and just makes a mess.

Set the rolls in a greased pan and set aside.  Now it’s time to make the sauce! 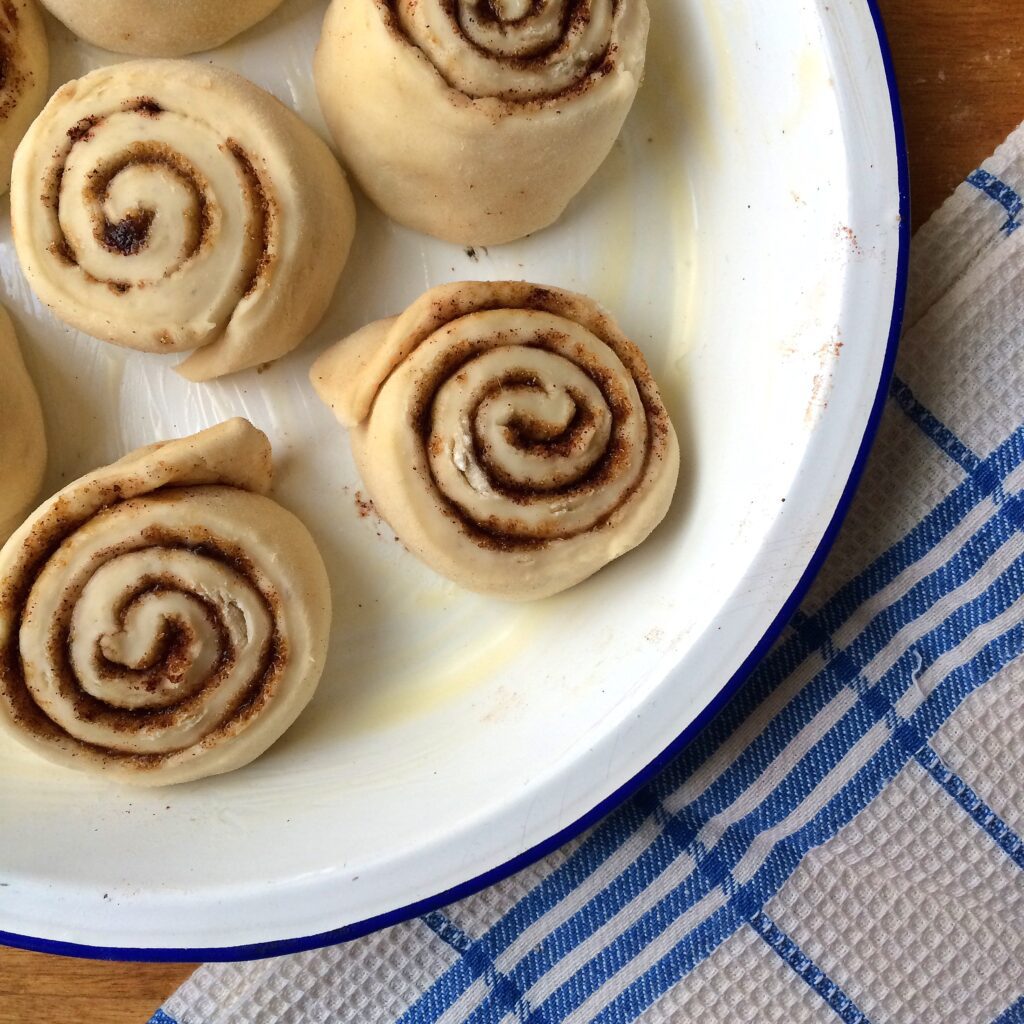 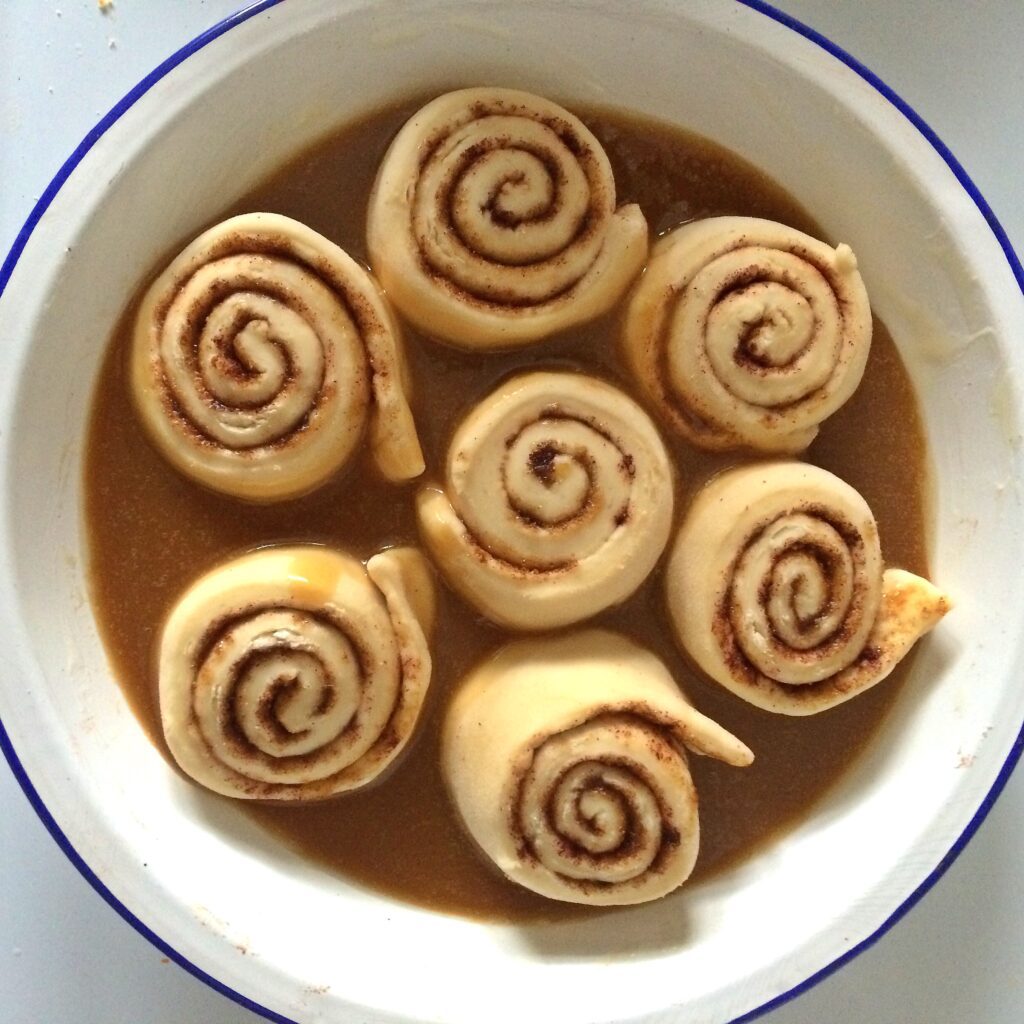 Divide the sauce equally among your pans and let your rolls rise to your desired size.  Set aside a bit of sauce to glaze over them after they’ve finished cooking.  (I know, it’s hard not to lick all of the remaining sauce while you’re waiting. . . or is that just me?) 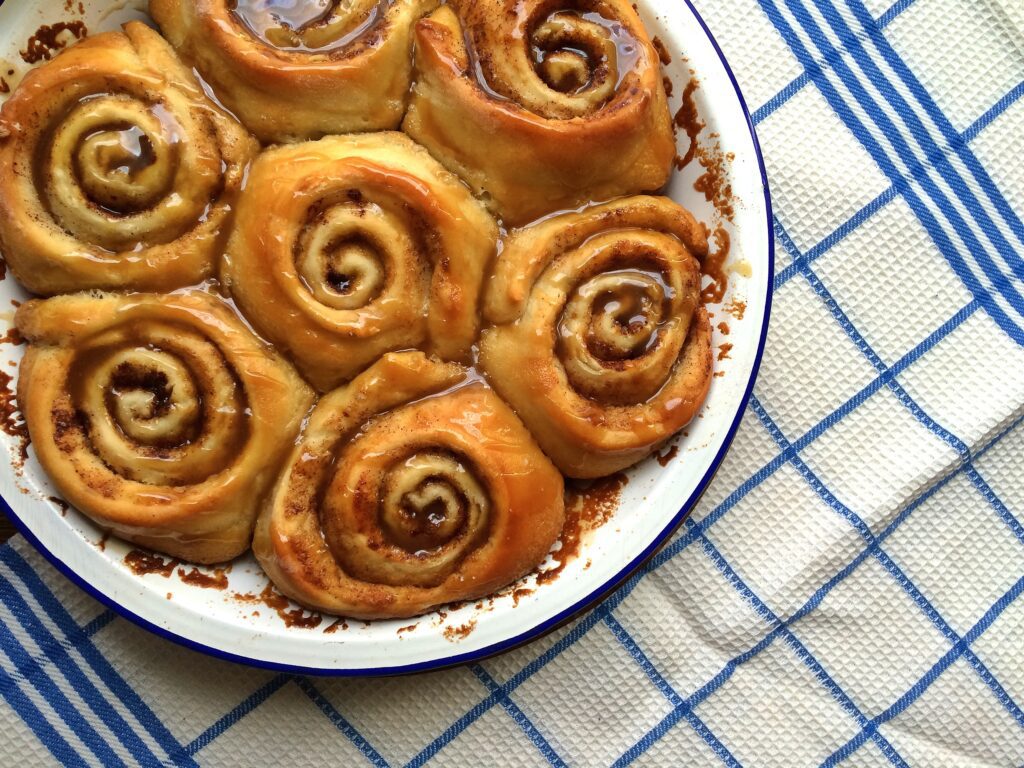 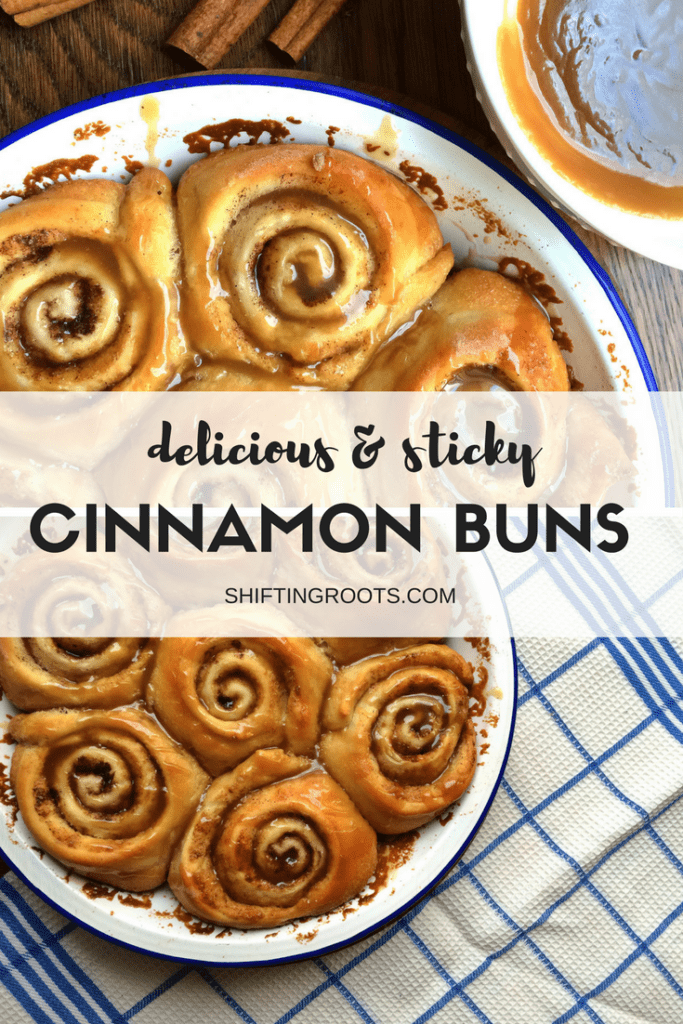 1. Dissolve sugar in warm water and add yeast. Let sit for ten minutes. Whisk in two eggs. Add flour one cup at a time and mix with dough hook. Add in the pinch of salt with one of your cups of flour. Do not add in the salt before the flour, as it can make the yeast less effective. Let the dough rise in a greased bowl for 60-90 minutes, or until doubled. If it is cold outside, let rise in an oven that has been warmed up and turned off.

2. To make sauce, combine the cream, brown sugar, and butter in a sauce pan and mix until combined. Do not boil.

3. When the dough has doubled, punch down and divide into 4 smaller balls. Roll out into a rectangle. Spread over some of the melted butter. Sprinkle brown sugar and cinnamon. Roll up and cut into pieces with a string (as shown in the photo above). Set in a greased pie plate or casserole dish and pour in some sauce. Reserve a bit of sauce for drizzling at the end. Bake in a 350 degree oven for 15-20 minutes or until light golden brown. Drizzle with reserved sauce and enjoy!