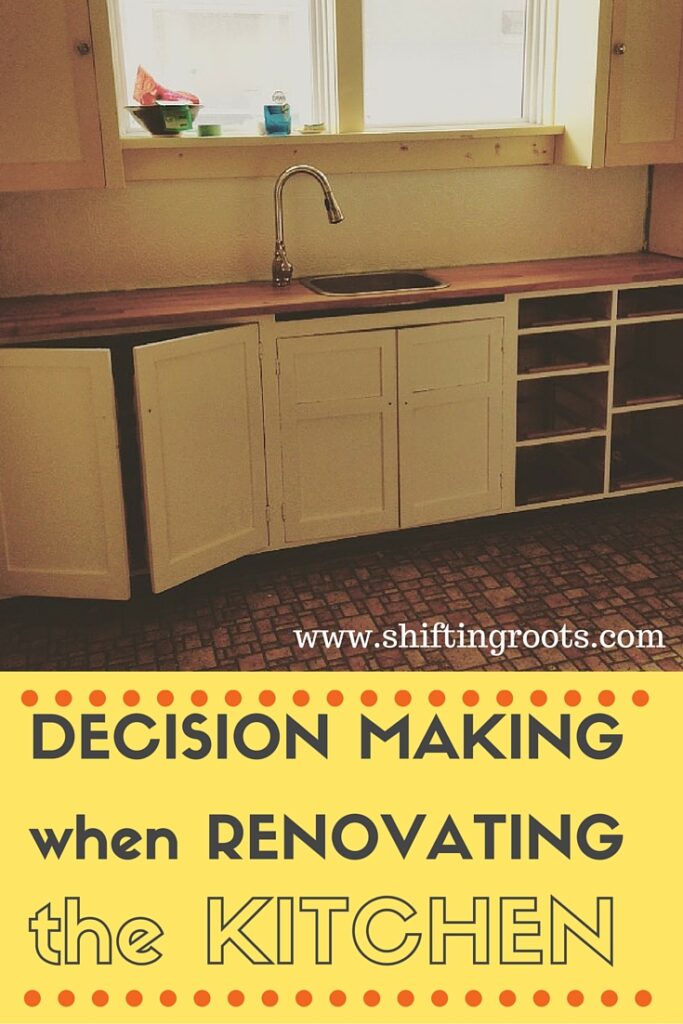 I really wanted to title this post “Kitchen Tetris,” but I didn’t think it would show up as well in search results.

You have two basic choices when you go into a reno: work with what you got or tear it all out.  In our case, we know we have asbestos as our insulation in our walls, so tear it all out is not really an option unless we’re willing to pay huge $$ to have it removed.  Also, I feel that if you’re buying a character house that is in decent condition, part of why you buy it is to retain the character.  At least, that’s my philosophy.

On first glance our kitchen is pretty small.  However, after living with it for a while, it actually is quite sufficient for what we need, you just have to be okay with using a step ladder to get your stuff.  Counter space is an issue, but we’ll be adding open lower cabinets around the stove later to increase it. 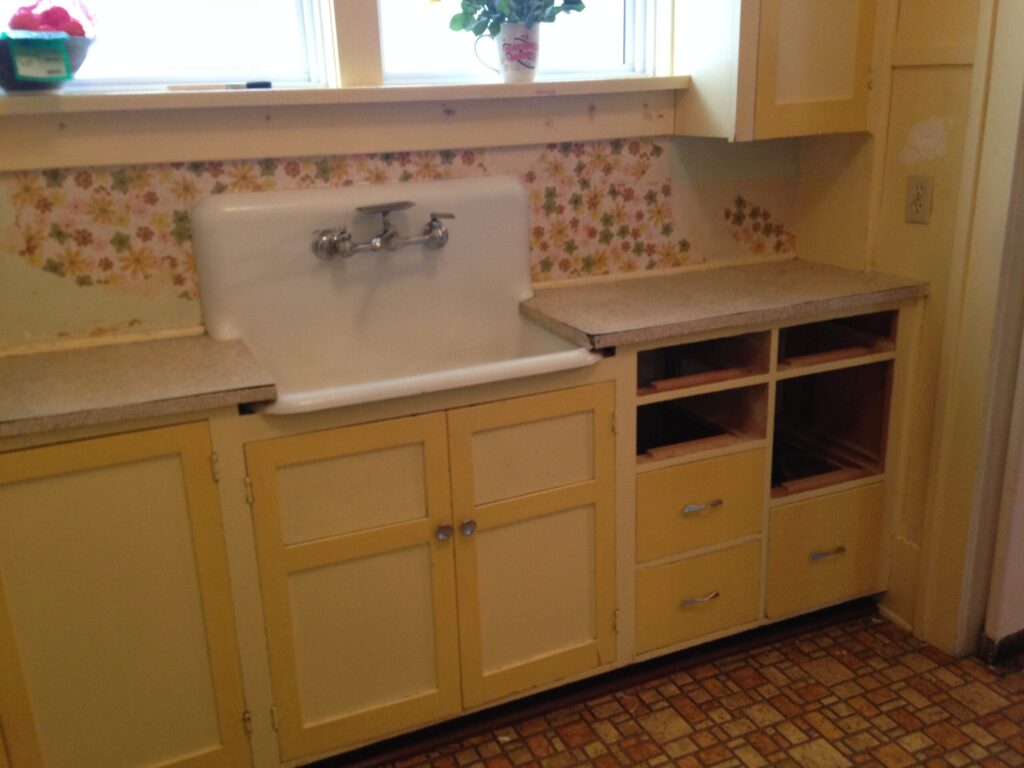 The kitchen came with all drawers, we had taken some out to see how the countertop was attached.

However, it is really ugly.  An ugly paint job, sixties flooring (which hides dirt well), wallpaper backsplash, countertops with linoleum nailed on, and a lovely but corroded farmhouse sink.

Our first instinct was to keep the sink and refinish it.  However, the sink was quite low, so you would get soaked every time you did the dishes.  After living with it for a month and doing our dishes in a tupperware container instead, we decided it had to go.  Then the problems (aka: Kitchen Tetris) started. 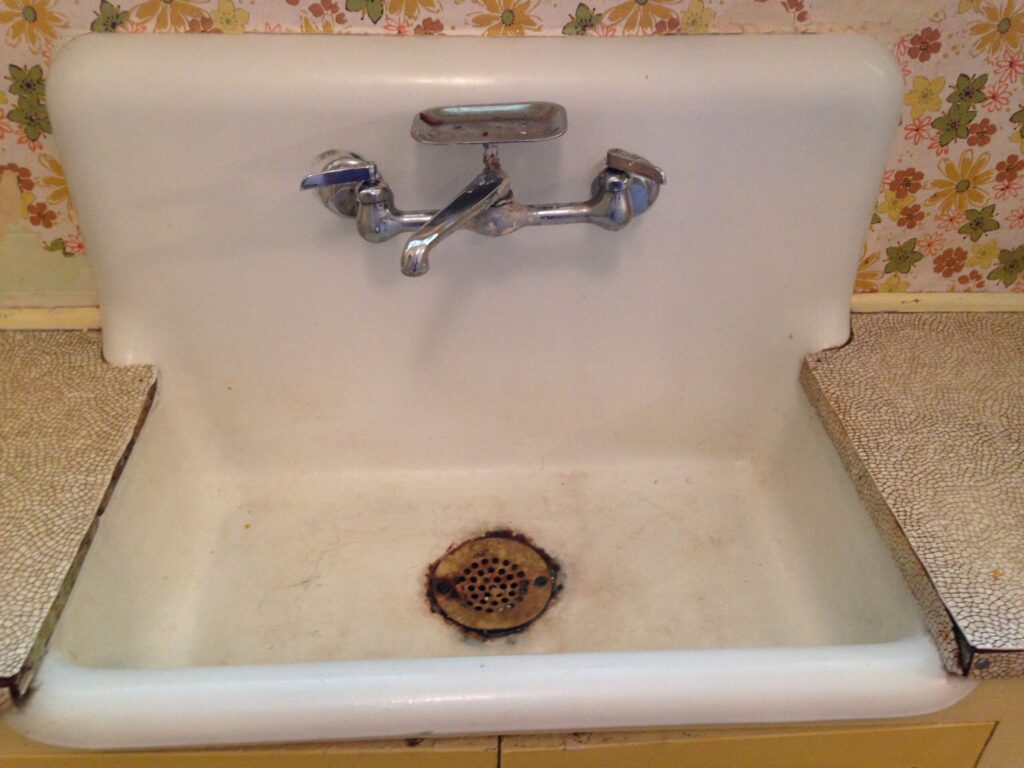 Could this sink be any grosser?

All of the counters were custom built around that sink, which means that we needed countertops with a depth of 17 inches, and the standard size is 22 inches.  In theory, there was enough space to rip out the bottom counters and replace with standard size, but then we would have lost this really cute custom side cabinet, which really adds to the character.  17 inch counters it is. 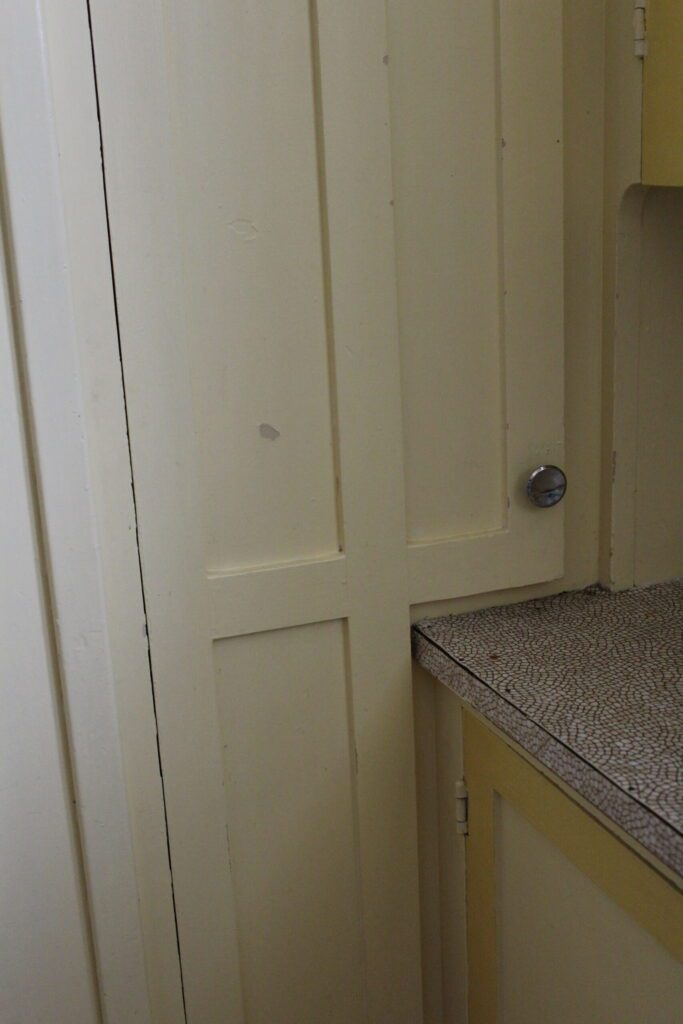 We went with butcher block counters from Ikea, and thankfully they also had a sink with a depth of 15 inches.  Done and done.  Except that once we saw everything in real life, we realized there was zero space for the facet to go behind the sink.  And zero space to even think about tiling the backsplash.

Three faucets later, we agreed on the Annabelle faucet from Moen.  It reminds of us an old water pump and looks better than we hoped off to the side. 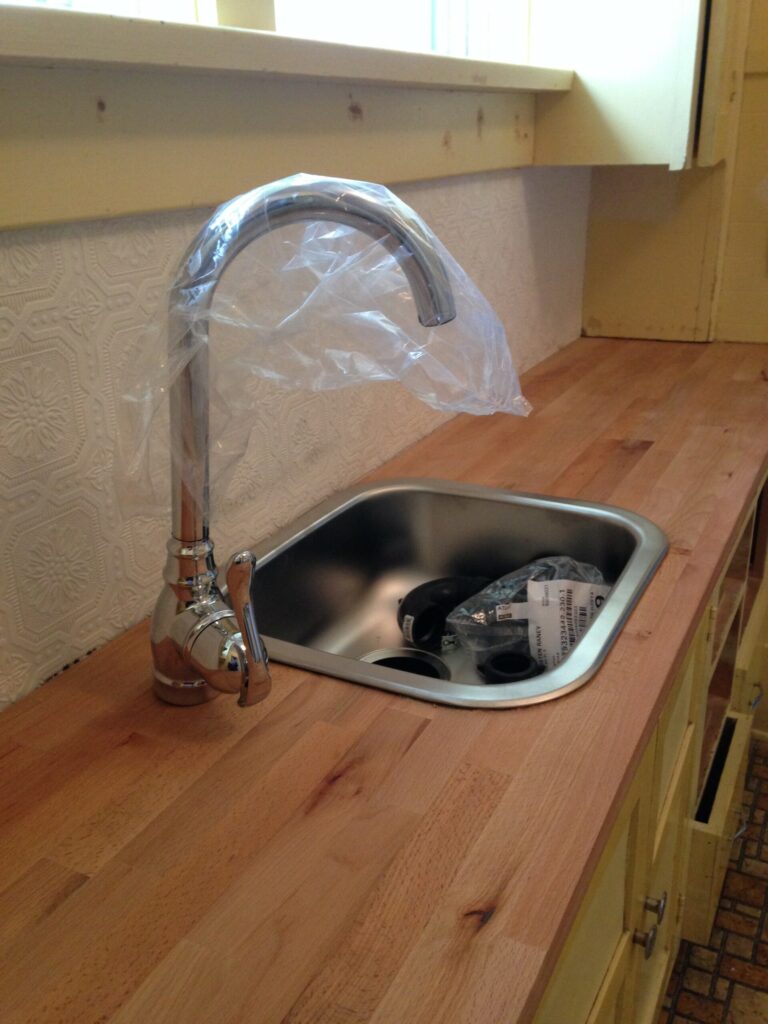 As for the backsplash, the original wallpaper was not coming off easily, so in the end I decided to put paintable wallpaper over it, and paint and seal it.  I don’t know if this will end up being the best decision, but we could not spare a half inch of counter space.  So far the clear coat seems like it will hold up well.

Yesterday I started painting the lower cabinets with white chalk paint.  I’ll be doing a section of cabinets each week, and then I’ll purchase the extra open cabinets, paint the walls, and hang open shelving above the awkward area around the fridge.  The best part about shallow countertops?  A nice leftover piece of wood to use for the open shelving. 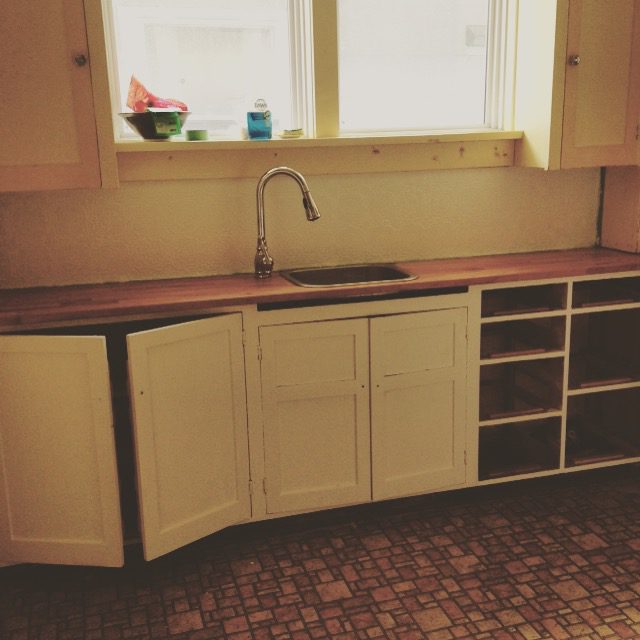 So far so good! Can’t wait to do the next section next week.