Decluttering the Black Hole in my Kitchen

Decluttering can be a lonely job, so lets walk through it together.  I’ll share my pictures and thought process as I’m working my way through my home.  If you are someone who is a very logical and ordered thinker, this post may not be for you.  My brain just doesn’t work that way.  Let’s call this… decluttering for the naturally disorganized.

Our house was relatively clutter free until we found renters for the other house.  We needed to move everything that way still lying around the old house and shove it in to the new one.  Did I mention it was September?  Forget having time to actually go through anything in September.  Then add in me being sick in October and November, the write off that is December, and here we are.

This time around I’m being ruthless.  If I haven’t touched it since we moved, its gone.  (Unless it’s one of those necessary seasonal items like a winter jacket or rubber boots, etc.)

I’m also asking myself a couple of questions along the way.  Does this actually serve a purpose in my life?  What step or steps are getting in the way of me keeping this area clutter free.  Is this the best home for this item?  Is there another home that would be more logical?  Do I have a similar item that could do the same job? 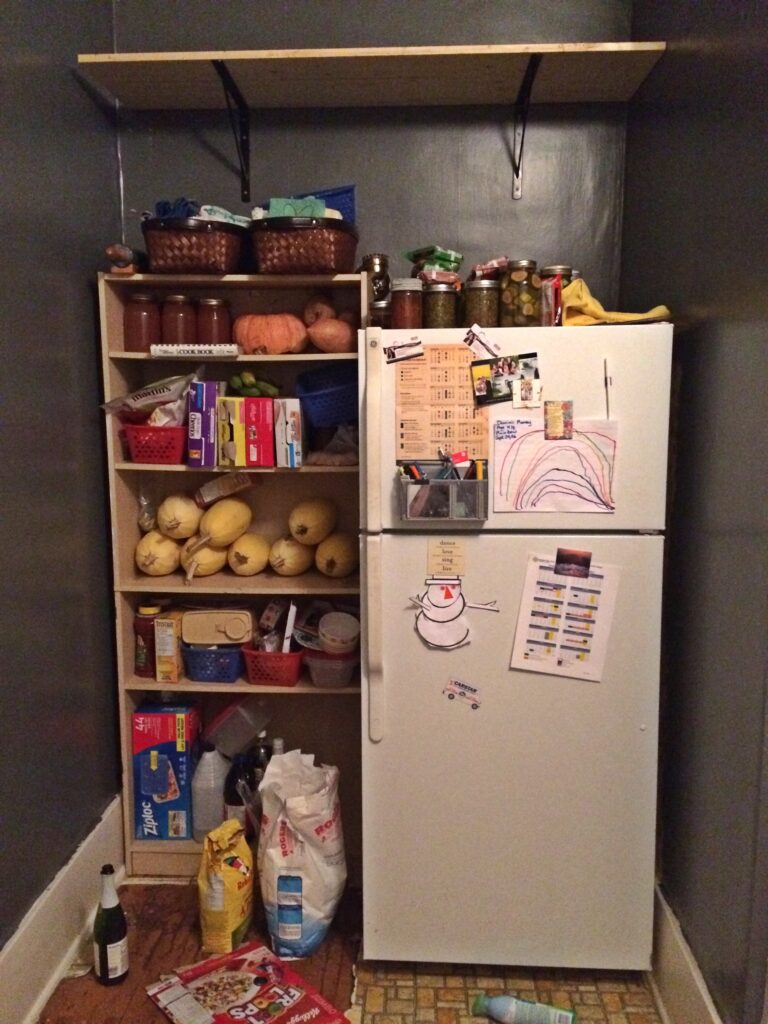 Welcome to the black hole of my kitchen.  This corner has been the worst to work with.  Originally there was a counter there, but it was in inconvenient work space that nobody used and just attracted clutter.  I but in a shelf, but now its a large storage space that attracts clutter.  Gah.  Let’s go through area by area and see what can improve. 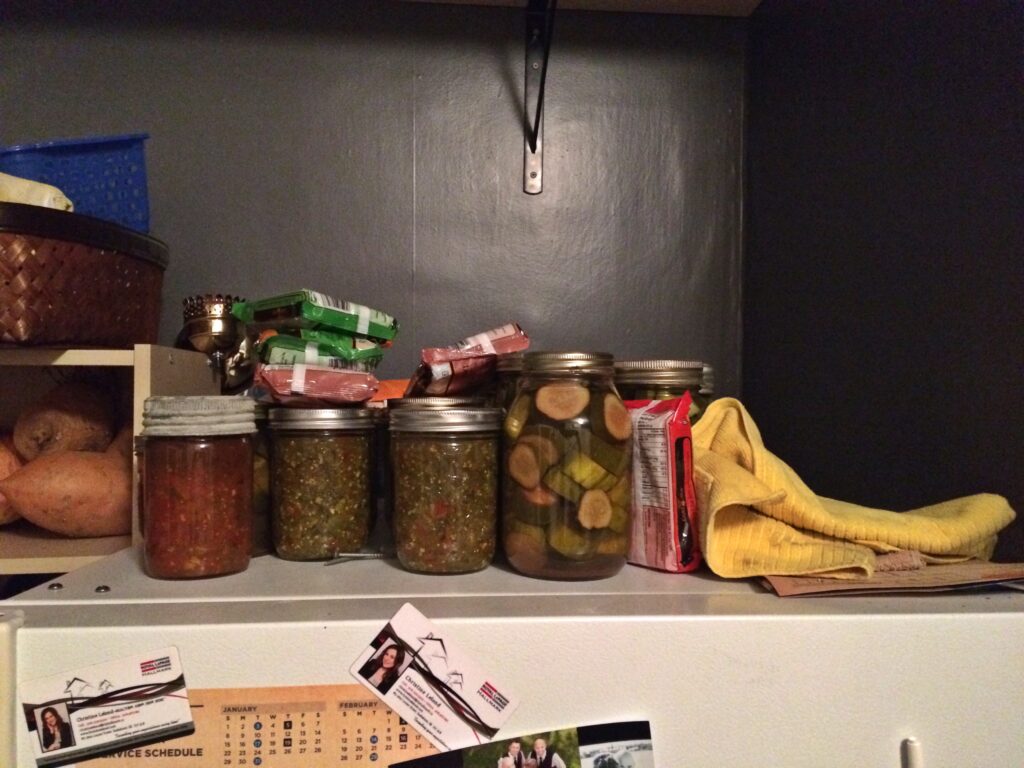 Why oh why do I shove things up on the fridge?  Usually just the canning lives there, but even when it isn’t surrounded by noodles and random dust cloths it still looks messy. 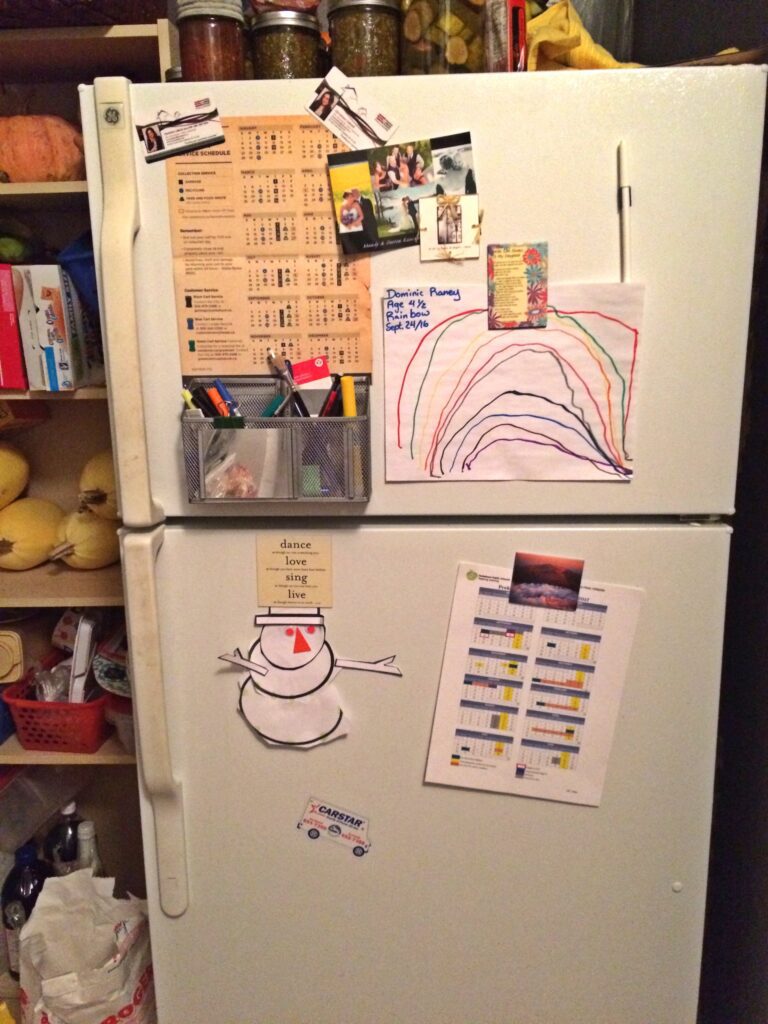 All of this stuff is great, but it can be moved to the side of the fridge.  A clean fronted fridge is a calming fridge.  Also, nobody ever uses that wire pen holder, so it can probably be given away. 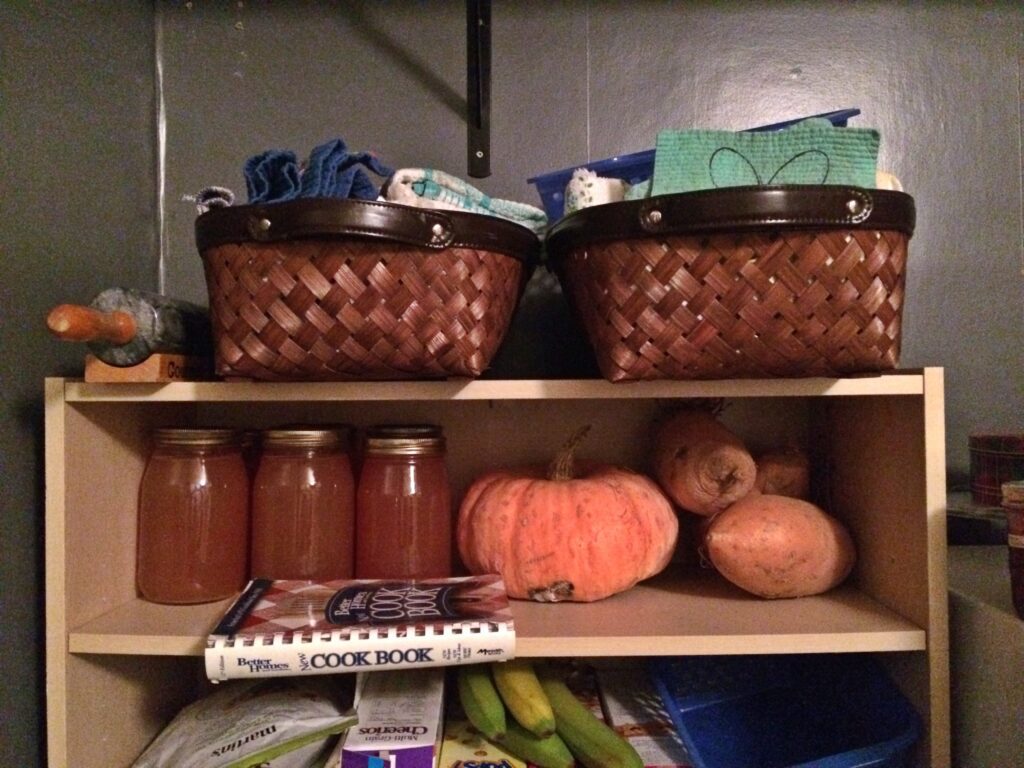 I attempted organization of my rags, but there’s too many of them for the container.  What is the cookbook doing here?  It has an actual home that is not this shelf.  Both the pumpkin and sweet potatoes are starting to rot, so those need to go to the compost.

This was supposed to be the cereal and snack cupboard, but its just a disaster.  The blue and red containers are too small, and the cereal boxes are too big for this shelf. 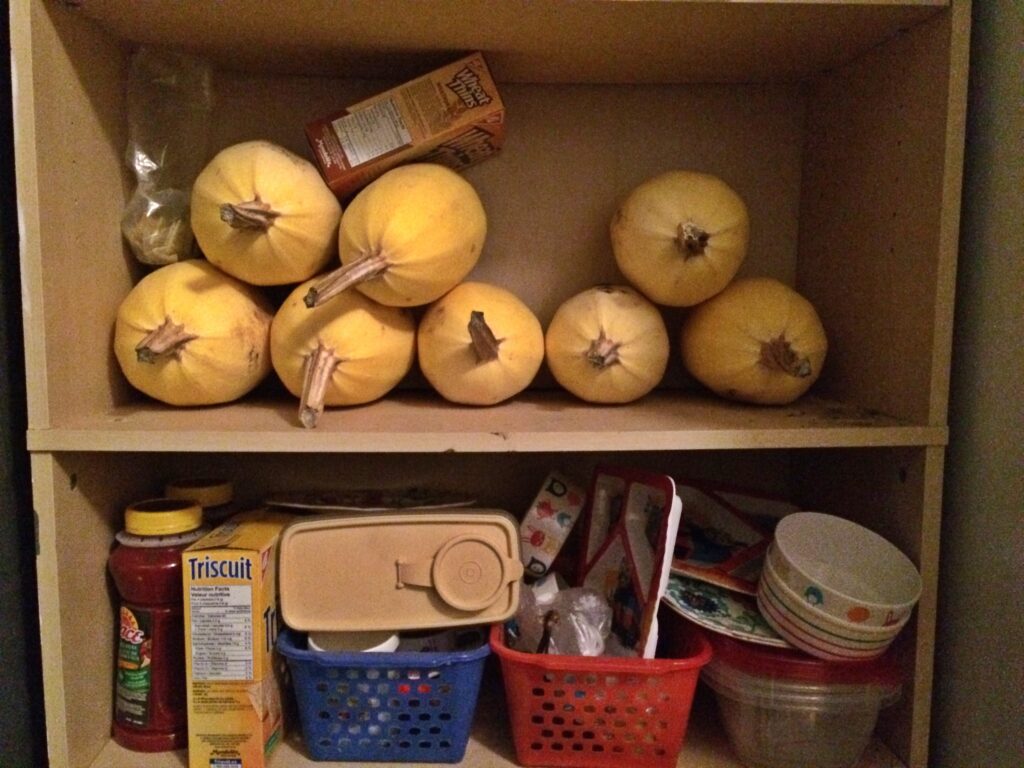 The squash overlords have a new home and I’ll be eating them in the next couple of weeks.  The bottom shelf was an attempt at giving Dominic a snack shelf, but it’s a huge disaster and he never gets his own snacks anyway. 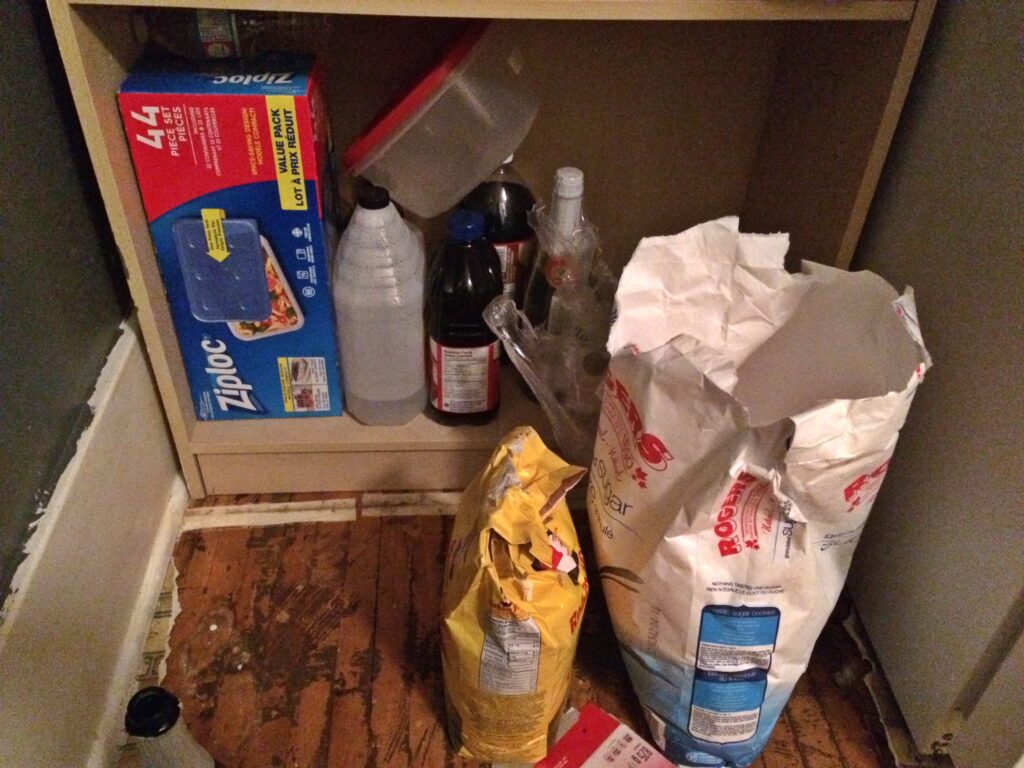 This is the home for everything that doesn’t fit nicely in the few cupboards we have.  Sigh.

I purchased some extra containers from Walmart that were $6-$8 each.  They’re plastic, which is probably better in the kitchen where you need to wipe up lots of spills.  I also repurposed some of the containers around our home and bought two stylish containers from Homesense. 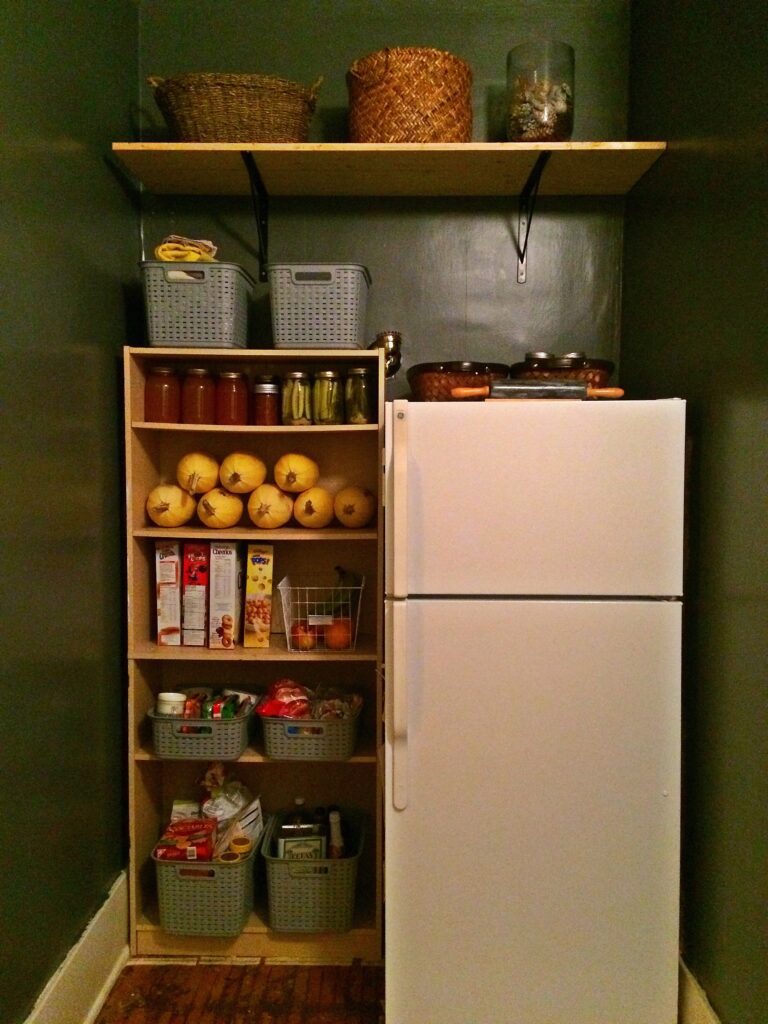 Finally this corner makes sense.  Everything has a home and is calming to look at.  The Hermit installed an upper shelf for me so we can store some of our lesser used items.  Now to just touch up those few spots of paint. . .

What’s the worst room in your house for clutter?  How do you keep it under control? 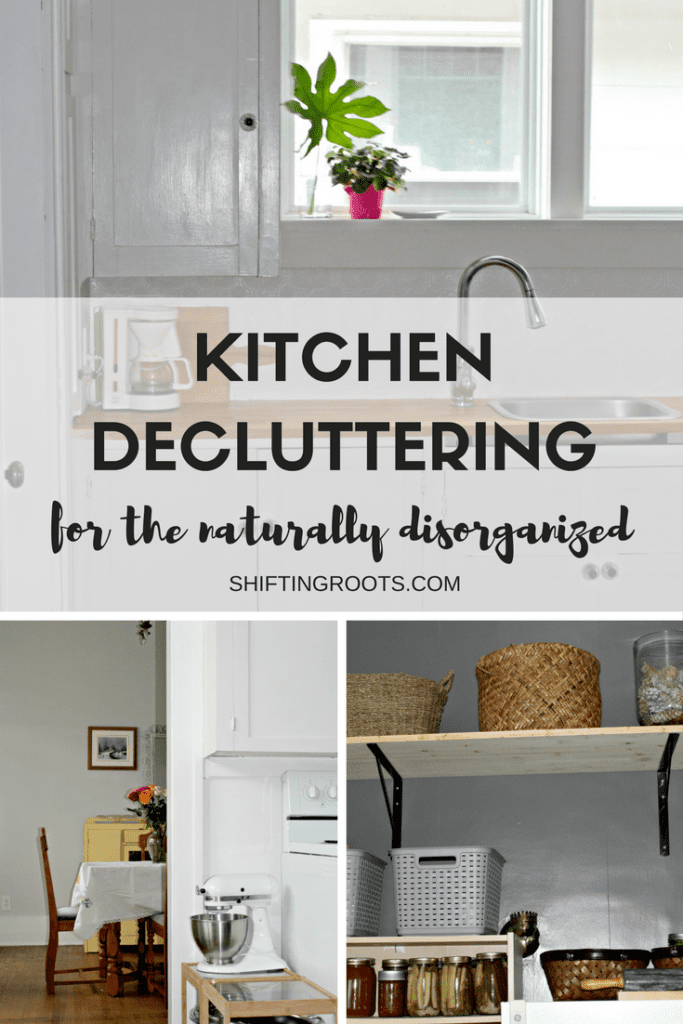