In Search of a Simpler Life: My Decluttering Philosophy 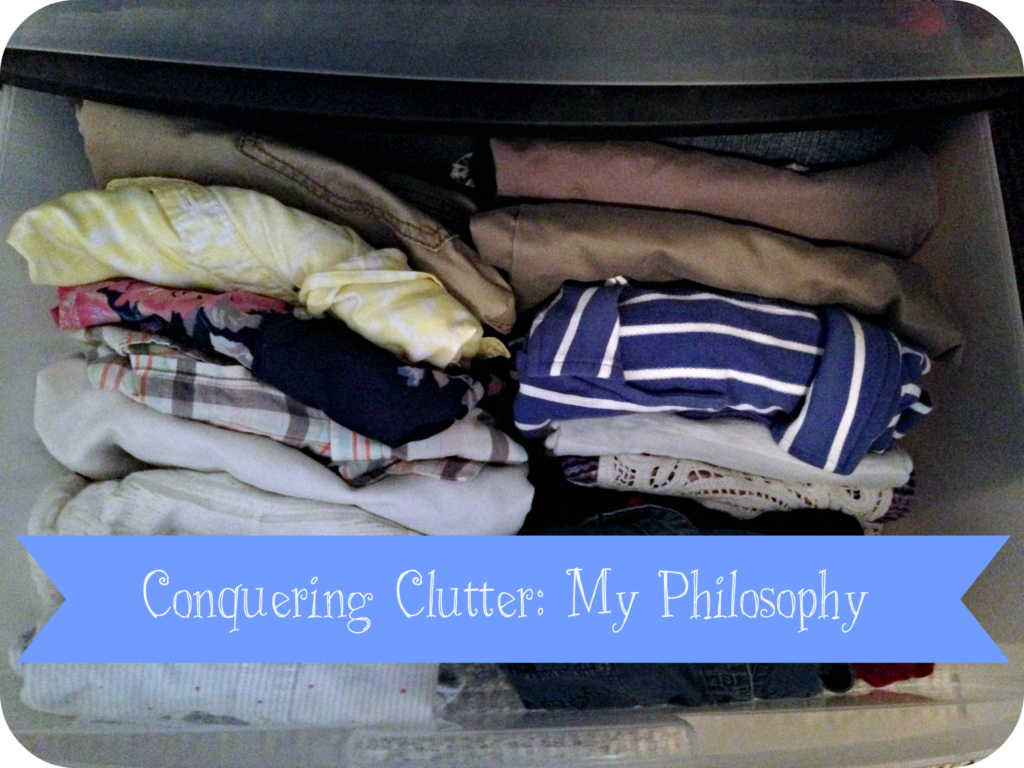 All my life I have been a messy person.  Add that to an artistic personality who always has projects on the go and you have a recipe for disaster.

I started trying to be a neat person shortly after I got married.  With two people’s amount of possessions there was just no way I could keep up.  Enter my first major attempt at being a neat person: Flylady!

I loved flylady because it seemed doable.  She focuses on one baby step at a time and is someone who is not naturally organized.  While she maybe didn’t speak to my 20-something at the time heart, I sure did my best to follow her faithfully for about a year.  And it mostly worked!  Sure, I was annoyed at the constant emails and didn’t do every single task every single day, but she showed me the power of 15 minutes and our house generally stayed clean enough that the Hermit and I could get it company ready in 30 minutes to 1 hour on any given day.

Then we decided to move.  How on earth did we still have such a backlog of clutter?!?!  It seemed like I was chucking things left right and centre and there was still too much.  It seemed that I could throw away easy stuff, but all the emotionally charged stuff kept going with me from one move to the next and was never dealt with.  Or something seemed “useful” and I should keep it, but I was never actually using it or looking at it.  It just became another item stored in a box somewhere in the basement to be forgotten.  Worse yet, I would go out and buy something I was sure we didn’t have, only to discover on a cleaning binge that we actually did have it.

Finally the Hermit bought a copy of The Life Changing Magic of Tidying.  It was a hard read.  I knew she was right, but it was difficult to admit so many of the mistakes I was making.  It felt scary to throw all my possessions on the floor and get rid of so much.  But we were committed.

We started with the clothes.  We had 12 black garbage bags.  12!!  And that’s not even counting all of DS’s clothes that were set out for a garage sale!!  (Maybe another 5-8 bags?)  I felt so ashamed.  How could we possibly own this much clothing?!?!  However, once it was all out of the house and I saw what I was left with, I felt so at peace.  I had exactly what I wanted to wear.  KonMari is also right that you will never have more clothes than that.  I’ve actually got rid of a few more things since then and don’t miss them.  I still can’t believe that all the clothing I own (except for jackets) fits in 5 small drawers.  It truly is magical.

We are still not finished the process (more blogs to come about that), but feel so much more at peace since we let go of a massive amount of possessions.  At our new house we currently have 4 everyday cups and 4 plates.  If you would have told me a year ago that I would agree to this I would have told you you’re crazy.  But it’s fine!  It forces us to do the dishes and clean up.  (We’re only a family of three, so if you’re thinking of going this minimal with plates, I would recommend one for each family member plus 1 of 2 more.  We use our fine china whenever we have guests.)  And cleaning up isn’t such a big deal when you only have 4 plates.

We also find that since we’ve reduced DS’s toys he actually plays better and for longer.  He does his best playing when I’ve just cleaned the living room and things are spotless.  If there are too many toys, he gets really anxious and doesn’t play with anything.

So in short, after a lifetime of slight hoarding tendencies, my new mantra really is “less is more.”  Even though I’m not done the process, I find that I have more time to do fun things and say yes, because I’m not always weighted down by the thought that I need to get my house in order.  Less things=more freedom, less mental clutter, and less guilt.  I don’t know about you, but I’m sick and tired of feeling guilty all the time!!

Are you thinking of decluttering?  What methods did you find successful?  Or are you just one of those naturally awesome tidy people and we should be taking lessons from you?  Hit me up in the comments!